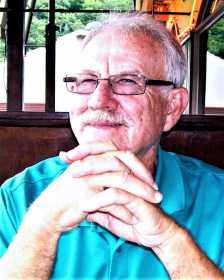 Leonard was a 1958 graduate of Thayer High School in Thayer, Kan. He joined the U.S. Air Force in 1958 and was discharged in 1962. He attended Emporia State College in Emporia, Kan., for two years, then he joined the Emporia Police Department before becoming a trooper with the Kansas State Police in Johnson County, Kansas. He returned to Iola, Kan., where he owned and operated many businesses. Menegay’s downtown café, Ken’s Pizza, an antique store, western store, and real estate company. He moved to Nevada, Mo., and was the manager for the Pro Shop at Frank Peters Golf Course. He became the general manager of the Rural Water District in Nevada, then managed the Pro Shop at the golf course in El Dorado Springs before his retirement.

In 1971, he became the father of Rachelle Jean Wheeler and she was the light of his life. A beautiful child with special needs.

In 1996, Leonard and Vicky Lynne Isaac were married in Nevada, Mo., and became a family with Mike and Derek.

He will be missed by his family, golfing buddies, and many friends.

Leonard was preceded in death by his parents, Leonard and Flossie; daughter, Rachelle; three sisters, Fern, Frances and Shirley; and brother, Ted.

A graveside service under the direction of the Fossett-Mosher Funeral Home in Mt. Vernon, Mo., will be held at 2 p.m., Thursday, May 14, at the South Center Cemetery in Thayer, Kan. Visitation will be held from 5 to 7 p.m., Wednesday, May 13, in the funeral chapel.

Memorial donations may be made payable to Intrepid Hospice, in care of the funeral home. Online condolences may be shared at www.FossettMosherFuneralHome.com.