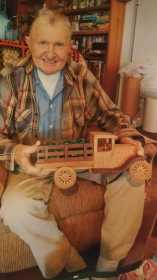 Max was raised in the Emporia, Kan., area. After moving to Vernon County in 1957 he worked at the grain elevator in Milo, MFA Exchange in Bronaugh, and then moved to Golden City for a time and managed the MFA Exchange there. Upon his return to Milo he worked as a meat cutter for a number of years, and then worked an additional 14 years at O’Sullivan Industries in Lamar until his retirement. Max raised cattle most of his life, and also enjoyed gardening.

Memorials are suggested in his memory to the ALS Foundation in care of Ferry Funeral Home in Nevada.