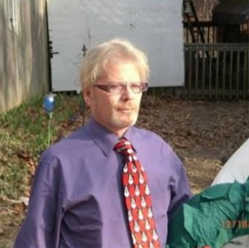 Jeffrey passed away Tuesday, March 24, 2020, from complications of the flu, no funeral or service was held. His father, Ronald Richter, was taking care of cremation arrangements. Jeffrey was born March 25, 1963, in El Paso, Texas.

Jeffrey was preceded in death by his mother, Sally Ann (Toncre) Richter. He is survived by his partner, Greg Metzler, of Nevada, Mo.; father, Ronald Richter, of Nixa, Mo.; sister, Pamela Stoelzel and husband, Craig, of Lamar, Mo.; and step-brother Ronald Richter Jr of Flippin, Ark.

Jeff graduated from Lamar High School in Lamar, Mo., in 1981. Jeff moved to Lamar with his family in 1977 from El Paso, Texas. He worked in Nevada at Nevada Regional Medical Center until his health caused him to retire. Jeff also received an Associates degree from Crowder College in Applied Science with Medical Specality.

Jeff described himself with these words, "I enjoy animals and have many pets ranging from the ordinary to the exotic.”