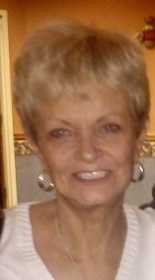 Charlotte Norwood Reid, passed from this life on May 10, 2020, following a lengthy illness, in Springfield, Mo.

Charlotte was raised in Nevada where she attended school until her graduation in 1965.

All through her school years she was a cheerleader and was also Head cheerleader. Charlotte truly loved being in school plays each year.

After graduation Charlotte went on a special all girls trip to California with three of her high school friends. Vicki Curtis, Marcy Shearer, and Linda Pursley (they rode in Linda's '65 Mustang convertible), Charlotte and Marcy loved California and decided to stay. During her time in California, Charlotte worked for Pacific Bell.

Charlotte moved back to Nevada for a short time before moving to the KC area where she went to work for Southwestern Bell in 1966.

It was during this time when she met the love of her life, Dick Reid. They married in 1967.

Not long after they were married Dick was sent to Viet Nam, so Charlotte moved back to Nevada and took a job at Gibsons.

When Dick returned from the war, they moved back to KC. There Charlotte gave birth to their first child, daughter, Angila.

The family next moved to Springfield where Charlotte juggled caring for a new baby while working at several jobs. Dick went back to school on his GI Bill, and although they lived a busy life these were some of their happiest years.

In 1973, they moved to the Lake of the Ozarks area. Dick became a teacher at Stover, Mo. In 1975, Charlotte gave birth to twin boys, Mathew and Michael.

After the boys were old enough to go to school, Charlotte began selling commercial Real Estate. As she had done all her life she met lots of people, and was soon asked to help create the Ambassador program at the Laurie, Mo., Nursing Home. Under her well-known active leadership, there were soon over 100 Ambassador volunteers.

Charlotte also became the leader of several fundraising projects for the local schools and fire department. In that area if you wanted something done you asked Charlotte!

She loved bringing in outside entertainment and scheduling other local events.

During the Urban Cowboy craze in the late 70's, Charlotte taught western dancing classes. She was an avid dancer all her life.

Soon the local Lake of the Ozarks West Chamber of Commerce (which represented many towns on the Laurie side of the lake) approached Charlotte to ask her to become the Executive Director of the Chamber.

Under her tireless leadership the Chamber grew and it required them to move into a succession of larger offices. She and Dick built a strip mall in Laurie, and they rented spaces to other businesses. They also had their own Bass Pro Franchise Store. Dick remembers Charlotte learning all about Bass Pros products so she could sell them.

Both Charlotte and Dick moved in 2007 after retirement to be near their boys in Springfield.

The family had a private ceremony to celebrate her life. Several friends are creating a life book collection of memories which they plan to share with all her friends and family.

Charlotte is survived by her husband, Dick Reid; daughter, Angila Mrazek; son, Mathew Reid; and son, Michael Reid. She had numerous grandchildren and a host of relatives.

Condolences and memories may be sent to carp3@sbcglobal.net and these will be forwarded to the family.