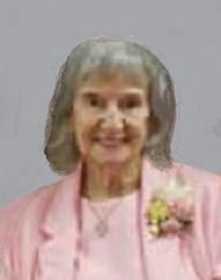 Johnnie, while still an infant, moved to Oklahoma with her family. They returned to Missouri when she was eight years old and she attended elementary schools in the Nevada and Milo area, and freshman and sophomore years in Montevallo before graduating from Virgil High School in Kansas. Following her marriage to Dale, they moved to Indiana where they lived for 40 years. Johnnie worked in the art department of National Tile Company and during WWII, she worked in allocations for Anaconda Wire and Cable Company. In 1945, she decided to retire so that she could raise their two daughters and was a dedicated wife and mother.

Following her husband’s retirement from General Motors they moved to Moundville, MO in 1976. Johnnie moved her church membership to the Moundville United Methodist Church. She joined Wayside Club and Jolly Homemakers Club. Her hobby was designing and sewing clothing for herself and her daughters, and some crafts. She loved flowers and butterflies, Cardinals, soft music and candlelight.

A memorial service will be held at 11 a.m., Wednesday, July 1, at Ferry Funeral Home Nevada with the Rev. Kay Zimmer officiating. A private burial was held at Mount Pleasant Cemetery in Dederick, Mo., at an earlier date.

Memorials are suggested in her memory to Moundville Methodist Church in care of Ferry Funeral Home.