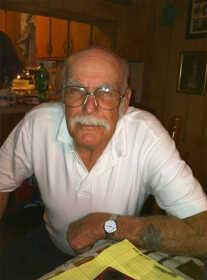 Charles Henry Marcee, or Papa as we all knew him, born April 11, 1937, in Steelville, Mo., was a proud American military man. He was a father, grandfather and even a great-grandfather who loved his family and his country.

Charles passed on July 1, 2020, at Nevada Nursing and Rehab with his family at his bedside. Charles is survived by his two children, Scott Marcee and Michelle Hogan (David Hogan); followed by grandchildren Samuel Hogan (Alexandra Hogan) and David J. Hogan; and great-granddaughter, Alaina Hogan.

Charles loved to spend time with his family at BBQ’s and Holiday events. He enjoyed watching his family grow with grandchildren. Charles touched many hearts, not only in his family, but also his community after moving to Nevada Mo., to be closer to loved ones. Charles served in the Navy and spent most of his adult life traveling the country with his career as a truck driver. He got to see and experience life’s greatest pleasures before he left us here on earth.

Charles was preceded in death by his parents Virginia Hobble and Charles Herman Marcee.