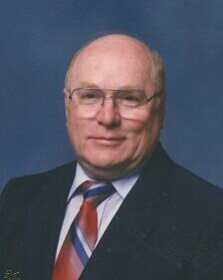 John lived his early years in Bellwood and attended Bellwood Public School for all 12 years. He then joined the United States Air Force in December of 1951, serving until December of 1955 at which time he was honorably discharged having obtained the rank of Staff Sargent. Following his years in the service he went to Nebraska College of Barbering in Omaha. After completing his training, he worked as a barber in Omaha, Gordon, and Stuart, Neb., for 22 years. At that time, he moved to Stockton, Mo., and then to Nevada where he was employed by 3M for an additional 22 years. John was a member of the First Christian Church in Nevada, and the Nevada American Legion.

Funeral services will be held at 1 p.m., Saturday, Sept. 19, at Ferry Funeral Home, in Nevada, with Pastor Bill Platt officiating. Interment with military honors will follow in Moore Cemetery in Nevada. The family will receive friends from noon to 1 p.m., prior to the service at the funeral home.

Memorials are suggested in his memory to the First Christian Church in care of Ferry Funeral Home.