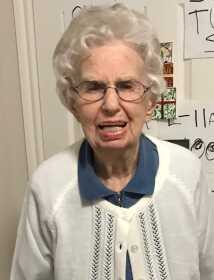 Juanita grew up in Crystal Springs, Miss., where she graduated high school and then attended Co-Lin Community College in Wesson, Miss. Juanita went on to serve in the United States Navy from July 8, 1943, to Oct. 15, 1945, and was stationed stateside during World War II. Following her service years, she and Harold came to Bronaugh to farm with Harold’s father, and while there, they welcomed two of their children. The couple lived in Illinois from 1954-1970 adding two more children to the family. After returning to Vernon County Juanita was a substitute teacher in the Bronaugh School District for 10 years. Juanita was a member of the Heritage Baptist Church and was very active in every church she attended, teaching Sunday School for many years. She was also a caregiver for the elderly for 10 years while living in the Bronaugh and Sheldon area. Following the death of her husband she moved to Nevada. She has resided in Kansas City since 2016.

Funeral services will be held at 10 a.m., Saturday, Sept. 19, 2020, at Ferry Funeral Home, in Nevada, with Pastor Stan Bunch officiating. Interment with Military Honors will follow in Worsley Cemetery in Bronaugh. The family will receive friends from 5 to 7 p.m., Friday, at the funeral home.

Memorials are suggested in her memory to Worsley Cemetery or Heritage Baptist Church in care of Ferry Funeral Home.