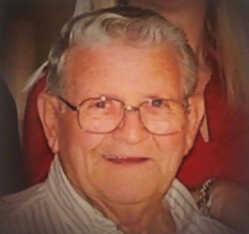 Bill grew up in Jasper County and graduated from Carthage High School Class of 1951. He served in the United States Army and was stationed in Germany during the Korean War. He retuned to Missouri and worked for Nabisco his entire career, retiring in 1988. He was a longtime member of the VFW, and Elks Lodge in Nevada, and was a proud member of the Republican National Committee. Bill enjoyed his time spent with the Maxwell Locker Gang, was a member of the MO-Kan Squares, and was a past member of the Nevada Men’s Bowling League. In addition, he built several houses.

Graveside services with Military Honors will be held at 3 p.m., Thursday, Oct. 8, at Faskens Cemetery, Carthage, Mo., with Larry Malcom officiating. Friends may call from now and until noon on Thursday at Ferry Funeral Home in Nevada.

Memorials are suggested in his memory to VFW in Nevada in care of Ferry Funeral Home.