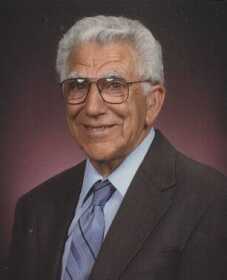 Sonny was raised on a self-sufficient family farm where they raised gardens, cattle, and dairy. He was drafted into the U.S. Army in December of 1952 and received an honorable medical discharge due to hearing loss. After the service Sonny worked for Chevrolet in Kansa City and later delivered milk for Sealtest. Sonny owned several Dairy Queen franchises before moving to Nevada in 1974 and operated a Dairy Queen and in 1975 he opened the existing Dairy Queen on Cherry Street. He operated D.O. Motors in Nevada on the old Dairy Queen site. After selling the Dairy Queen in 1996 he continued to work with his son at D.O. Motors until 2003. Sonny’s longtime wish in life was to hear clearly. Sonny has a passion for antique cars, racing, collecting die cast cars, and tractors. He was a member of the First Baptist Church in Nevada, and a 60+ year member of the Masonic Lodge. Sonny also helped his wife, LaVerne at her job at Ferry Funeral Home.

Memorials are suggested in his memory to the Children’s Department of the First Baptist Church in care of Ferry Funeral Home.