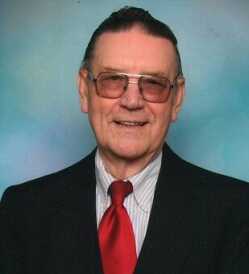 Ray Darrell Lukenbill, 88, Nevada, Mo., passed away on Sunday, Nov. 8, 2020, at the Kansas City Hospice House following a lengthy illness. Ray was born May 28, 1932, in rural Appleton City, St. Clair County, Mo., to Ray and Glenna (Muchmore) Lukenbill. He was united in marriage to Darlene Davis on July 4, 1952, in Butler, Mo., and she survives of the home.

Ray grew up in St. Clair County and attended school in Appleton City. Ray attended Rockhurst College earning a BS Degree in Business Administration with a minor in both Philosophy and Economics. He served in the United States Army from September of 1952 until September of 1954, during the Korean War, obtaining the rank of Corporal. He and Darlene came to Nevada in 1972 where he worked at Farm and Home Savings and Loan as a computer programmer.

Ray was a Boy Scout Leader when his two sons were in Scouts. He was the Treasurer for the Boy Scout troop, and Nevada Food Pantry. Ray was a member of the Community of Christ Church in Nevada where he was treasurer and played the piano. He was an ordained Deacon of the church. He was a quiet soft-spoken family man – a gentle leader.

The family will receive friends from 4-5:30 p.m., Tuesday, at Ferry Funeral Home in Nevada. Private family services will follow on Wednesday.

Memorials are suggested in his memory to the Kansas City Hospice House in care of Ferry Funeral Home in Nevada.