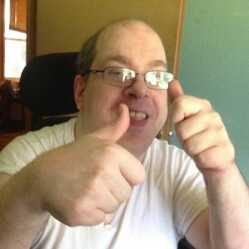 James was born Aug. 26, 1974, to Eugene J. Golden, III and Brenda L. (Brown) Golden, in Nevada, Mo. He was born more than 11 weeks early, and was in the NICU at Children’s Mercy Hospital in Kansas City for months, coming home the day he was supposed to be born. The prematurity caused severe cerebral palsy, which resulted in his need for a wheelchair of some sort all his life. When he was very young his parents were advised to put him in an “institution” as he would “never be more than a vegetable." He started school at the school for severely disabled, then learned to read at age 6 when the tutor he had at the time (because of a complex orthopedic surgery) gave him appropriate attention. He was then switched to the local school district. He was finally “mainstreamed” into regular classes his last two years of high school, and his senior year earned a place on the A-B Honor Roll. He graduated from Nevada High School in 1993. He worked briefly at Quality Products north of Nevada, then stayed at home.

James loved talking to people and in his twenties studied for and earned a technician’s license as a ham radio operator. He so enjoyed talking to people around the county (and country) on the ham radio. As his vision declined, he became unable to use the traditional ham radio, learned of Handiham, which is ham radio over the internet (hinternet), specifically designed for persons with disabilities. After participating in daily and weekly sessions on Handiham, he became a favorite “net control manager," the person who opens that network and recognizes each person who signs on and wishes to speak, sometimes fielding as many as 40 persons in a one-hour session. At one point he was net control for three weekly nets. He was so favored for his unwavering politeness that several other ham operators joined to purchase a lifetime membership for him. He continued with Handiham until about two weeks before his death.

James also began a daily blog post, which he posted to individuals on a special Facebook page, and emailed to others. He also printed out as many as three full copies of all of his blogs for the week, then delivered the hard copies to interested persons at his church. Each of his posts always mentioned his love for The Trinity and his love for other people. Each also either humorously or seriously shared a bit of his life and struggles.

James was a firm believer in our Savior, Jesus Christ, and his love for others grew as his knowledge of God’s Word grew. Until his vision became terrible, he did three or four daily Bible readings with devotionals. Even after that he continued to do one daily reading, using an online Bible source and a magnifier up to 450 percent. After his cataract surgery this past October he was delighted to be able to read his print Bible again and do four readings and devotionals per day. He was (most of the time) a very patient person, and polite, never afraid to express his love for others verbally or by an “arm hug” or “hand kiss."

James is survived by his mother; two sisters, Amber Golden and Christi Good; brother-in-law, Eric Good; sister-in-Spirit, Kyla Hoffman; and brother-in-Spirit, Tim Tabor. Also adopted sisters, Gayla Curtis of Oklahoma and her husband, Jeff, Janice Loewen of Oklahoma, and Connie Kuenneth and her husband, Jeff, of Illinois. Also, an uncle, Christopher Golden of Chicago, and several cousins: Douglas Gremminger, Patricia (Trish) Voigt, and Donna Gode. He also leaves behind his beloved church family, who knew his love for them.

Private burial was held Dec. 14, 2020. Memorial services will be held on Monday, Dec. 21, at 6 p.m., at the First Baptist Church in Nevada, for friends and family to tell the impact James' life had on each person who wishes to share.

The family request no plants or flowers.