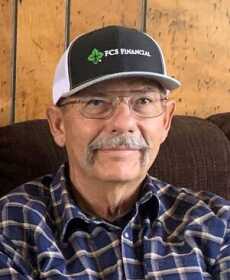 Wayne came with his family to Vernon County at a young age settling in Richards, Mo. He attended school there and graduated from Richards High School Class of 1965. He served in the United States Army from 1967-1969 during the Vietnam War. Following his years in the service he returned to Richards where he farmed and raised cattle most of his life. In addition, he was a pecan farmer and co-owner of Missouri Northern Pecans, LLC. Wayne served on the Richards Township Board and was Trustee for many years, and also on the Soil and Water Board of Vernon County. He was a member of the Fort Scott VFW.

Funeral services will be held at 10 a.m., Thursday, Dec. 31, at Ferry Funeral Home in Nevada with the Rev. Bill Smith officiating. Interment with Military Funeral Honors will be held at Deerfield Cemetery in Deerfield. The family will receive friends from 6 to 7 p.m., Wednesday, at the funeral home.

Memorials are suggested in his memory to Deerfield Cemetery in care of Ferry Funeral Home.