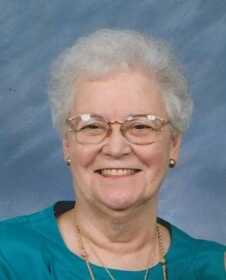 Frances Zoe Lewis was born May 17, 1928, nine miles east of Schell City to Leslie E. and Gladys Ruth (Strader) Bowman. She graduated from Schell City High School. Frances moved to Tucson, Ariz., due to her mother’s health in 1945. She attended the 1945-1946 year at the University of Arizona. John Lewis was discharged from the Army on April 9 of 1946 and came to Tucson where they were married on May 25, 1946. She and John both received a mortuary science degree from the Gupton-Jones College for Mortuary Science in 1947. In 1954, they moved to Schell City. To this union two children were born, Anna Ruth and Frances Ava.

Sadly, Anna Ruth passed away on Sept. 23, 1995. Frances was also preceded in death by her husband, John G. Lewis.

Frances was very active in the community. She served on the School Board, was a 75-year member of the Eastern Star, a member of the Modern Mother’s and the Modern Priscillas, and was a member of the White Shrine. The Lewis’ joined the Schell City Methodist Church after moving back from Metz. She helped her husband run Lewis & Son Hardware, Funeral Home, and ambulance service.

Frances is very loved and will be missed by all.

Following a private burial at Green Lawn Cemetery in Schell City, memorial services will be held at a later date and will be announced by Lewis-Hoagland Funeral Home in Schell City.