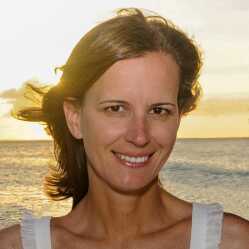 Erica (Tuomi) Grothaus of Mahtomedi, Minn., passed away suddenly on Jan. 3, 2021. Just 49, Erica was born Feb. 18, 1971, in Minneapolis, Minn., to Norman and Gayle (Kirkpatrick) Tuomi. Erica spent her early childhood in Cottage Grove, Minn., where she became an older sister and lifelong friend to her sibling Nicole.

Erica will always be remembered for touching the lives of so many people around her. Erica had a heart of gold and was known as a beautiful person inside and out.

Erica’s developmental and high school years were spent in Nevada, Mo., where she built deep and lasting friendships with her classmates and countless members of the tight-knit community.

In high school, she became an accomplished basketball player. Erica graduated from Nevada High School in 1989. After high school, she attended William Woods University in Fulton, Mo., where she continued her athletic career and earned a Bachelor of Arts in Business Administration. She had many fond memories of attending William Woods University and the many new sisters and friends she made as a member of the Alpha Chi Omega sorority. Towards the end of college, she did a brief business internship in her hometown of Nevada, Mo., which is where she met her future husband, Patrick John Grothaus. Pat’s employer, 3M, had just brought him to Nevada at the beginning of what would become a career spanning over 30 years. After graduation, Erica moved to Merriam, Kan., to start her career in banking and finance. Although they were 100 miles apart, Pat and Erica’s romance grew.

On Sept. 7, 1996, Erica and Pat were married at Saint Mary’s Catholic Church in Nevada, Mo. On May 7, 1998, they joyfully celebrated the birth of their son, Jacob Patrick Grothaus. On Aug. 29, 2000, they were blessed with a daughter, Emma Nicole Grothaus. While raising their family, Erica and Pat had the opportunity to live in many places including Nevada, Mo., Brookings, S.D., Medina, Ohio, and Mahtomedi, Minn. They made many wonderful friends at each stop along the way.

Erica was incredibly proud of both of her children, and she loved them more than anything in the world. Both children were heavily involved in athletics throughout their years of schooling, and Erica was a driving force behind their success. She rarely, if ever, missed a practice, spending thousands of hours at their events and activities. She championed their successes and consoled them in times of adversity while always holding them to high standards both athletically and in the classroom. She absolutely loved watching them play. One of Erica’s lifelong passions was basketball. She passed her love of the game on to her daughter, Emma, who is a key member of the Lehigh University women’s basketball team and is majoring in Industrial & Systems Engineering. Erica was so proud of Jacob for recently graduating with a degree in computer science from the University of Wisconsin-Madison and was extremely excited about his budding career and his incredibly bright future.

Once her children entered high school, Erica devoted her time working as a paraprofessional educator with young children at Wildwood Elementary school in Mahtomedi, Minn. Her students knew her as “Miss Erica” and she was able to share her kind heart, humble personality, and endless love for all the kids at school.

A celebration of Erica’s life will be held when conditions allow a gathering for friends and family. In lieu of any flowers or gifts the family would appreciate any donations made to the American Autoimmune Related Diseases Association (AARDA) https://www.aarda.org/