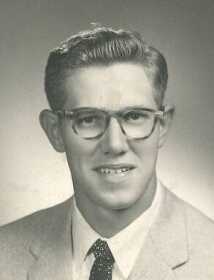 Walter was raised in Sheldon and graduated from Sheldon High School in 1959. He served in the United States Navy from 1961-1963. Following his service years, Walter worked at the Nevada State Hospital for 23 years as an aide, and Thorco in Lamar for 15 years as a computerized welder, in addition to farming and raising cattle his whole life. He was a member of the Sheldon Christian Church.

Survivors include his three sons, Dwayne Ford, Sheldon, Dennis Ford, Sheldon, and Darrell Ford, Sheldon; two grandchildren, Dustin Ford (Stephanie), Lamar, and Camie Ford, Nevada; three great-grandchildren, Daxton, Denver, and Clair; numerous nieces and nephews; as well as his close friends, Robert McGinnis, and Paula Bechtle. In addition to his wife, Mary, he was preceded in death by five sisters and one brother.

Memorials are suggested in his memory to Sheldon Cemetery in care of Ferry Funeral Home.