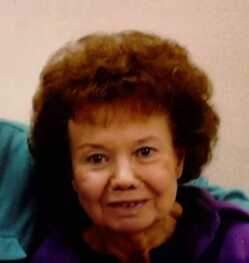 Ruth was raised in Zanesville and graduated from Zanesville High School in 1951. She met her future husband via mail while he was stationed in Hawaii serving in the United States Air Force. The courtship, through the mail, lasted 1 ˝ years. Following Tom’s return from Hawaii the couple was married two weeks following their first face to face meeting. Ruth worked in retail sales for a number of years at Sears and Roebuck, JC Penny, Montgomery Ward selling men’s clothes, she also worked as an aide at several nursing homes in towns where Tom pastored.

After coming to Nevada in December 1988 Ruth began working at Nevada Regional Medical Center as cashier for nutritional services retiring after 15 years. She was very active in Anchor Fellowship and in other churches Tom had pastored in over the years.

In addition to her husband, Tom, she is survived by three children, Linda Atkins, Nevada, Tony Haynes (Cathy), Rolla, Mo., and Lisa Kirschemann, Nevada; 14 grandchildren; 39 great-grandchildren and one on the way; and one great-great-granddaughter and one on the way; two brothers, Robert Kirkpatrick (Ruth), Zanesville, Ohio, and Charles Kirkpatrick, Columbus, Ohio; as well as several nieces and nephews. She was preceded in death by her parents; and one son-in-law, Tony Atkins.

Funeral services will be held at 10:30 a.m., Monday, Feb. 1, at Ferry Funeral Home in Nevada with the Rev. Jerod Lamb officiating. Private interment will follow in the National Cemetery in Fort Scott, Kan. The family will receive friends from 3 to 4 p.m., Sunday, at the funeral home.

Memorials are suggested in her memory to Barone Alzheimer’s Care Center or Nevada Regional Medical Center in care of Ferry Funeral Home.