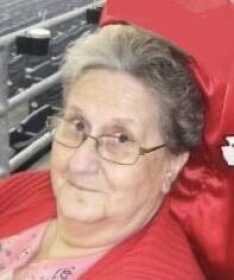 Evelyn Friel, age, 94, passed away on Sunday, Jan. 31, 2021, at Jefferson City Nursing and Rehab, in Jefferson City, Mo. Evelyn, the youngest of seven children, was born on March 9, 1926, in Thedford, Neb., the daughter of Hugh Elliott and Mary Cordis Elliot.

Evelyn married John Thomas “Johnny” Friel on May 11, 1943, in Seneca, Neb. The couple spent a short time in Brownsville, Texas, before Johnny was shipped overseas. Evelyn returned to Nebraska to be closer to family and their first child was born before Johnny returned from the service. After the war Evelyn and Johnny lived in the Nebraska Sandhills before moving their family to Missouri in December of 1956. Evelyn and Johnny lived in a number of communities in the Nevada area before buying a home south of Nevada. Evelyn owned and operated the Rainbow Nursery for over 30 years. Childcare, especially infants, was her specialty. Evelyn cared for many “second” generations of children.

Evelyn enjoyed playing cards, Triominos, and reading. Many happy weekends were spent at Stockton Lake, hosting family dinners and swimming in the backyard pool. Evelyn also enjoyed quilting, with many stitches being sewn while the daycare children napped. Evelyn moved to Jefferson City during her last years to ensure Jeff was well established within the community before her passing.

Visitation will be held from 1 to 2 p.m., Friday, Feb. 5, with funeral services to follow at Ferry Funeral Home, in Nevada, with Father Peter Savidge officiating. Interment will follow in Mt. Calvary Cemetery, Nevada.

In lieu of flowers, memorial contributions are suggested to the Jefferson City Parks Special Populations Program, 1299 Lafayette St., Jefferson City, MO, 65101 or in care of Ferry Funeral Home, in Nevada.