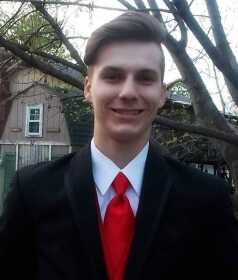 Joshuah “Josh” David Leonard, 24, passed away Jan. 27, 2021, in Independence, Mo. Visitation will be 5 to 6 p.m., Friday, Feb. 5, at Royer’s New Salem Funeral Home, Independence, Mo. Celebration of Life service will follow at 6 p.m. There will also be a graveside service at Mt. Vernon Cemetery in Walker, Mo., at a later date. In lieu of flowers the family suggest donations to the family.

Josh was born July 15, 1996, in Kansas City, Mo., to Gary E. and Kathie (Call) Leonard. Josh grew up in Sibley, Mo., graduating from Ft. Osage High School in 2014. After graduation, Josh worked doing landscaping for Ben’s Landscaping in Blue Springs, Mo. After that he followed in his dad’s footsteps working as a carpenter for Dan Faulke Construction Company in Kansas. Josh worked with his dad on the construction crew building many beautiful homes. Josh made the fourth generation of carpenters in his family tree. Josh loved animals and especially dogs. When he was a kid, he would carry puppies around in his pockets. Josh loved fishing and hunting mushrooms with his dad. After his boys were born, he loved playing with them, feeding and taking care of them. They were the lights of his life. Josh was goodhearted and loved helping his grandparents.

Josh was preceded in death by his grandparents, Patti and Paul Alexander and Jack Call.

Josh was very much loved and with broken hearts will be greatly missed by his friends and family.