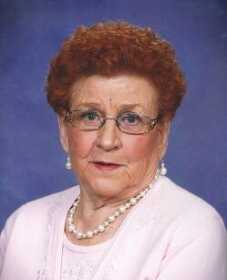 Betty, the oldest of seven children, attended Rockville High School and graduated in 1947. When she was 14 she began work at Lyndale Train Station in Bates County for two years, followed by the State Hospital in Nevada for a number of years; she also worked in the Avon office in the Kansas City area. Betty was a homemaker and in addition helped Harry with his businesses, Nevada Hab Center, until her retirement. She enjoyed Bowling League for many years.

Funeral services will be held at 10:30 a.m., Friday, Feb. 5, at Ferry Funeral Home, in Nevada, with Father Jim Lile officiating. Interment will follow in the National Cemetery in Fort Scott, Kan. Visitation will be held on Thursday, from 7 to 8 p.m., at the funeral home.

Memorials to the All Saints Episcopal Church are suggested and can be made in care of Ferry Funeral Home.