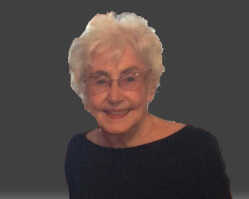 Barbara was born at home in Osawatomie, Kan., on Aug. 14, 1928, to John Ralph and Rena Ann (Lee) Braithwait. Her parents returned to their hometown of Bolivar, Mo., when she was one-year-old. She graduated from Bolivar High School in 1946. On July 5, 1948, she was queen of the Simon Bolivar Celebration, where the statute of Simon Bolivar was dedicated. At the celebration in Bolivar, she met President Harry S. Truman, the president of Venezuela, and actress Gloria Swanson.

She married Donald B. Russell later in 1948, and moved to Nevada, Mo. They had three children, John Bentley, Patricia Ann, and Susan Lee. She married L. Wayne Reed in 1969, who had two children, Barry and Debi. After their marriage, Barbara and Wayne moved to Springfield in 1971, when Wayne took a teaching position at Reed Junior School. Barbara completed her BSEd and MSEd at Southwest Missouri State and began the career she loved, teaching children at Fremont and Jeffries elementary schools.

Barbara cared deeply about her family and friends and the communities in which she lived. She had a passion for helping others, volunteering her time and energy to help many non-profit organizations over the years, including serving as a board member of the Nevada City Hospital and volunteering at Crosslines in Springfield.

Barbara was beautiful inside and out. She was compassionate and selfless in her relationships. Her family and friends felt her love, support, and guidance throughout their lives. She was a strong woman, who handled life’s opportunities and challenges with courage, determination, and grace. She lived her life as an example to all who knew her.

Her family would like to thank the staff of Montclair Senior Living Apartments and her personal caregivers for their loving care.

Barbara’s memorial service is private due to COVID. Arrangements are under the care and direction of Herman H. Lohmeyer Funeral Home in Springfield, Mo.

In lieu of flowers, the family suggests donations to Wesley United Methodist Church, PEO Chapter IA, or the charity of the donor’s choice.

Permanent online condolences, stories and photos may be shared at www.hhlohmeyer.com.