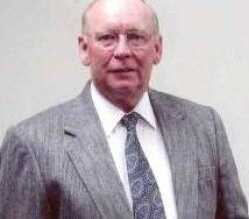 Jim, along with his wife, Arlene raised their children to work hard and be thankful for what they had. On many occasions, an evening meal was entirely grown or raised on the farm; this was the reward of hard work shared by the family. During his lifetime, Jim worked in a variety of occupations: factory work, construction, farming, and raising livestock. He was awarded the Outstanding Young Farmer Award in Vernon County in the mid 1970s. His passion for livestock was evident with a pasture full of Hereford cattle, a hog lot of Hampshire, Chester Whites, and Durocs, and a barnyard with quarter horses, along with his buckskin, Buck-O, and Australian shepherds, Booger and Digger. He made memories with his children as he taught them to drive a stick shift, haul hay, and corral cattle on horseback, as well as hunt and fish. These experiences were also taught to grandchildren with a new pride as “Grandpa” and “Pops.”

In memory of Jim, the family requests that anyone coming to the service wear a mask and socially distance as much as possible due to COVID-19. Online condolences can be left at blandhackleman@yahoo.com.