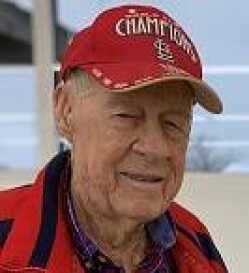 Amos Mannon Hinkle, 91, of Bronaugh, Mo., passed away Friday, Feb. 19, 2021, at his home. Amos was born on Jan. 13, 1930, to Ralph Hamilton Hinkle and Elva May (Harbison) Hinkle. Elva passed away when Amos was 2-years-old. After her passing, Ralph married Charlotte Carpenter in 1933. He was united in marriage to Mary Ann Earl on March 4, 1956, in Bronaugh, Mo., and she survives of the home. They spent nearly 65 years of wedded bliss together.

Amos was raised in the Avola, Mo., area where he attended the one room schoolhouse through the eighth grade. He then attended Sheldon High School for two years until redistricting sent him to Bronaugh High School. He graduated from Bronaugh in 1949.

He began his construction career by traveling all over America building and learning the trade during the economic boom of the 1950s. He later started his own concrete business, followed by his construction company building custom homes all over the Vernon County area until his retirement.

Amos was a friend to many and loved conversation. His love for his faith and family was closely followed by his love for the St. Louis Cardinals. He was a member of the Bronaugh Christian Church. He was an avid sports fan who enjoyed coaching and playing for many softball teams and league bowling. He loved supporting the Bronaugh school and sports programs throughout the years. He also enjoyed hunting, fishing, gardening, and spending time with his family. His favorite times were spent with his family, especially for Sunday dinners and holidays.

Funeral services will be held at 10 a.m., Tuesday, Feb. 23, at Ferry Funeral Home, Nevada, Mo., with Pastor Nick Hardison and Travis Lathrop officiating. Interment will follow in Shiloh Cemetery, Barton County, Mo. The family will receive friends from 5 to 7 p.m., Monday, Feb. 22, at the funeral home.

Contributions may be made in his memory to the Vernon County Youth Fair or Bronaugh R-7 Scholarship Fund.