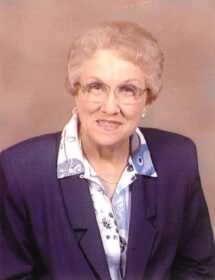 Maxine Newlon of Muskogee, Okla., passed away on Sunday, Feb. 21, 2021. She was born and raised in Guthrie, Okla., on Sept. 11, 1923, to Harry and Ruby Campbell. She attended Guthrie public schools. She received her B.M. degree in violin and viola from Oklahoma College for women in Chickasha, Okla., (currently USAO). She received her M.M. degree in viola from George Peabody College at Vanderbilt University.

She married Robert O. Newlon on June 28, 1953. She belonged to Trinity United Methodist Church. She was a professional musician who played viola in the Oklahoma City Symphony Orchestra. She also played viola in the Ft. Collins, Colorado Symphony Orchestra, the Springfield Missouri Symphony Orchestra, and the Denver, Colorado Symphony Orchestra. She taught vocal and instrumental music in the Guthrie, Oklahoma City Schools. She was an Orchestra Director for the Oklahoma City Public Schools. Maxine taught strings and orchestra in the Springfield, Mo., public schools and was a professor of Music and Orchestra at Cottey College in Nevada, Mo. She taught strings and orchestra in Fort Collins, Colo., and in Muskogee, Okla. She was the director of Christian Education for Plymouth Congregational Church in Wichita, Kan. She also directed Church Choirs in Guthrie, Okla., Nevada, Mo., Wichita, Kan., Springfield, Mo., and Muskogee, Okla.

She was preceded in death by her father, Harry Max Campbell; mother, Ruby Campbell; brothers, Alan Campbell and Russell Campbell; and husband, Robert O. Newlon in 1998.

A celebration of Maxine’s life will be 2 p.m., Thursday, Feb. 25, at Greenhill Cemetery Pavilion with Pastor Cody Robinson officiating.

Funeral services are under the direction of Cornerstone Funeral Home.

Condolences may be made to the family online at www.cornerstoneofmuskogee.com.