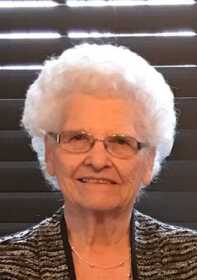 Dorothy was raised in Richards and graduated from Richards High School. She lived in Deerfield all her married life. She worked at Western Insurance for a time and at Bright’s Grill in Fort Scott, Kan. Dorothy enjoyed sewing, quilting, and trips to McDonalds in Nevada.

Survivors include a daughter, Penny Montee and her husband, Kevin, Arcadia, Kan.; grandsons, Kyle Montee and his wife, Leslie, and their daughter, Laila, Fort Scott, and Kolby Montee and his wife, Nicole, and their children, Kase and Krew, Farlington, Kan.; several nieces and nephews; and sister, Virginia Moberly, Nevada. In addition to her husband, Bill, she was preceded in death by her parents; one son, Dennis Pettibon; three brothers, J. R. “Buck” McConnaughey, Morse McConnaughey and Gene McConnaughey; and one sister, Lucille Kash.

Funeral services will be held at 2 p.m., Friday, March 5, at Ferry Funeral Home in Nevada, Mo. Interment will follow in Deerfield Cemetery. The family will receive friends from 7 to 8:30 p.m., Thursday, March 4, at the funeral home.

Those who wish may donate in Dorothy’s memory to the Deerfield Cemetery in care of Ferry Funeral Home.