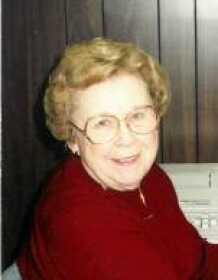 Mary was raised on a farm in Bourbon County, Kan. She graduated from Fulton High School. Following graduation, she worked at Western Insurance Companies in Fort Scott, Kan., from 1944 to 1948. After her sons were born, she went to work for Joseph L. Pohl Contractor, INC in 1957. In 1970, she was elected Secretary of the corporation and was also named Office Manager for the firm. She continued in that capacity until her retirement in 2012, completing 55 years of service.

She was a member of First Christian Church of Nevada where she taught Sunday School for a number of years. In more recent years, she began attending the Methodist Church of Nevada and was a constituent member. Her hobbies were knitting and quilting.

Mary was a very devoted Mom and Grannie and loved dearly by her sons, grandchildren, and great-grandchildren. Mary enjoyed outings of all kinds, especially when visiting family and friends. She enjoyed traveling and treasured her trips with her son to Colorado to visit family as well as her Branson trips with her siblings. More recently, when she wasn’t able to travel distances, she enjoyed her monthly outings to Fort Scott.

Funeral services will be held at 2 p.m., Tuesday, Oct. 12, at Ferry Funeral Home, in Nevada. The family will receive friends from 6 to 7 p.m., Monday, at the funeral home.

Any donations can be made in her name to the NRMC Foundation in care of the Ferry Funeral Home.