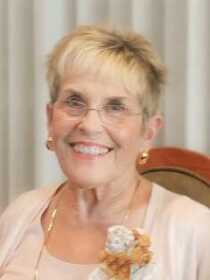 Susan was born Sept. 23, 1939, as the Great Depression was ending, and the sparks were beginning to start the flames of World War II. Susie was born to middle aged parents Donald N. Van Arsdale and Virginia Van Arsdale (Robinson). She was born in Omaha, Neb. She had two brothers Charles, 15, and James, 13, at the time when she was born.

Susie was raised where the family resided in Beatrice, Neb. She was baptized at the family church, Christ Church Episcopal, in Beatrice on March 23, 1940. When she was six years old, her father bought a farm, “Breadtray”, near Lampe, Mo., on the White River and the family later moved to Springfield, Mo. Both brothers had left home by that time and were serving in the military during WWII. Susie and her friends enjoyed many summers and vacations at Breadtray where the White River became Table Rock Lake. Over the past 50 plus years there has been many family trips to that area that always included a reminiscing drive to Breadtray.

Following High School, Susie attended Gulf Park College for Women in Gulfport, Miss. The college sponsored a European Touring Trip and Susie and her mother traveled through Holland, France, Germany and Italy in a VW Motor van with other students, her teacher and guide. Susie also traveled to Yellowstone National Park for two summers of 1959 and 1960 where she worked as a “Hash Hussie” at Mammoth Lodge in Yellowstone. She talked about that adventure numerous times over the years.

She then attended College at Missouri University in Columbia, Mo. She became a Chi Omega sister and graduated with an undergraduate degree in education. She then traveled west towards Denver, Colorado with a friend to start her teaching career.

Susie taught at a school in the Denver suburbs for two years. Her roommate set her up on a blind date to the Denver Stock Show with her eventual husband, James “Jim” W Krouch. She was impressed with his knowledge of the stockyard. Many weekends were spent on the road to Cheyenne, Wyo., to visit Jim and his family and they eventually became engaged.

Susie and Jim were married in Evergreen, Colo., on Aug. 21, 1965. They were married for 52 years before Jim’s unexpected passing in March of 2017. Susie taught fifth grade for the Laramie County School District in Cheyenne, Wyo., for several years but retired from teaching when they had children. They had two children, Kevin James Krouch and Kathleen Grace Evans (Krouch).

Susie spent many years involved in many different activities over the years. She belonged to St. Mark’s Episcopal Church for many years. She managed the St. Mark’s Clothes Hanger, served on the Altar Guild and ECW. Susie and Jim later converted to Catholicism and attended St. Mary’s Cathedral in Cheyenne, Wyo., starting in 2006.

Susie was a 39-year Member of P.E.O. She joined P.E.O. Chapter S of Cheyenne, Wyo., and later became a member of P.E.O. Chapter DW of Nevada, Mo., when she relocated. She served every position of P.E.O. except Treasurer. Susie belonged to the Cheyenne Women’s Civic League and enjoyed making things for their yearly Christmas House. She was also famous for her bakery foods and won many blue ribbons at the county fair for her baked breads. She was a lap swimmer who went and swam every morning before dawn at the Cheyenne Municipal Pool. She became part of the “pool pals” group who had spent time swimming together every morning for over 20 years. She also spent time volunteering with Jim as a pink lady at the Cheyenne Regional Hospital gift shop and front desk.

Susie and Jim spent their retired years traveling together with an RV across the country. They traveled to see friends and family in Missouri, Arizona, New Mexico, Illinois, and traveled as far as Oregon with the many adventures. They spent lots of time with their son Kevin in the Saratoga area in the Rocky Mountains camping. Susie moved to Nevada, Mo., in November of 2018 to live closer to her daughter, Katie, and her grandchildren and great-grandchild. She attended St Mary’s Catholic Church and attended Alter Guild meetings. She had wonderful neighbors in her new Stonegate community.

An Ecumenical Service for the deceased will be held on Wednesday, Oct. 27, at 6 p.m., at Ferry Funeral Home, Nevada, Mo., with visitation following from 6:30 to 8 p.m. A funeral Liturgy will be celebrated on Saturday, Nov. 13, 2021, at 10:30 a.m., at Catholic Cathedral of St. Mary in Cheyenne, Wyo., with an inurnment service to follow at the St. Mary’s Columbarium. A light lunch will be served following the inurnment for family and close friends. Cremation is under the care of Ferry Funeral Home, Nevada, Mo.