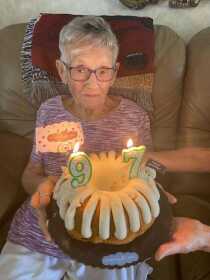 Thelma grew up in Nevada and graduated from Nevada High School. After her marriage to Norman they made their home in Independence, Mo. They moved back to Nevada in 1985, until she moved to Arizona in 2001.

Funeral services will be held at 11 a.m., Saturday, Oct. 23, at Ferry Funeral Home in Nevada. Interment will follow in Moore Cemetery, Nevada. The family will receive friends from 10 to 11:00 a.m., prior to the service at the funeral home.