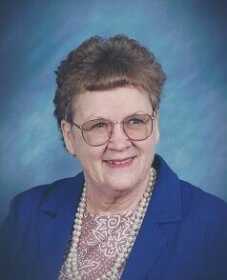 Shirley was raised in Nevada and graduated from Nevada High School Class of 1957. She worked at 54 Café for 18 years, followed by 3M Nevada from 1984 thru 2002, retiring after 18 years. Shirley loved being with her family, especially her grandchildren, and fishing. She enjoyed push mowing her yard and the yards of other family members. Shirley was known by everyone to be a “giving person”. While growing up she was a member of the Pine Street Baptist Church.

Graveside services will be held at 1:30 p.m., Tuesday, Nov. 22, at Moore Cemetery, in Nevada, with George (Bill) Garwood officiating. The family will receive friends from 5 to 7 p.m., Monday, at Ferry Funeral Home, in Nevada.

Memorials are suggested in her memory to the American Diabetes Association in care of Ferry Funeral Home in Nevada.